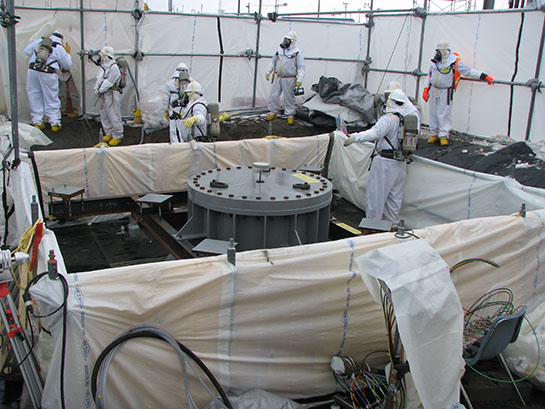 Water jet contractor AK Services made history by cutting the largest-ever access hole in an active U.S. Department of Energy radioactive waste storage tank at the DOE’s Hanford Site in southeastern Washington. The Boston-area water jet contractor cut a 55-inch diameter hole in the top of the underground tank to allow for the installation of a robotic system that will remove 247,000 gallons of radioactive and chemical waste stored in the tank during the Manhattan Project and Cold War so it can be vitrified for safer storage.

Battling freezing temperatures and the challenges of running remote-controlled ultra-high pressure water jet equipment from a 300-foot distance, AK Services used a specially engineered abrasive water jet cutting machine to make the huge cut through 15 inches of concrete and steel rebar in just 22 hours. They performed the cut at 8 inches per hour using an abrasivejet of garnet grit mixed with 3 gallons per minute of water pressurized to 48,000 psi with a Jet Edge waterjet intensifier pump. The finished cut is the culmination of more than a year of careful planning and preparation by AK Services and Hanford Site Tank Farms prime contractor Washington River Protection Solutions to ensure worker safety and protection of the environment, said Kent Smith, WRPS deputy manager of retrieval and closure operations.

AK Services spent a year developing the water jet cutting system for the project and testing different abrasives to get consistent data for rate of advance and garnet usage, said Carl Franson, AK Services vice president of operations.  “The motion device had to be specially developed to secure itself inside a 75-inch steel riser and cut a 55-inch hole,” Franson explained. “We also needed to be able to level the motion device to make sure it did not drag the abrasivejet focusing tubes on the concrete surface.

AK Services engineered a three-piece stainless steel motion system with two circles separated by guide bushings with a ring gear in the middle. The ring gear features four redundant Jet Edge High Flow abrasivejet cutting heads in case of failure and is driven by a set of reduction gears and a drive motor to achieve the proper cutting rate. Pneumatically actuated rams are placed on the sides and bottom to level and secure the system. “We were able to do the entire cut with the one lead cutting head,” Franson noted. “We used a Jet Edge High Flow Abrasivejet cutting head with a Roctec 100 focusing tube rather than the standard tungsten carbide and we ordered diamond orifices from Jet Edge to ensure the longest life possible.”

Once the system was in place, the cut itself was easy according to Franson, though not without challenges. “The biggest challenge was running the equipment from 300 feet away,” he said. “The tank top is in a radiation area and entry to the area is regulated to the extent that anything that enters the tank farm must be scanned and cleared prior to being released out of the fenced-in restricted area. The pumps and control systems had to be outside of the restricted area to ensure they did not become contaminated with radiation and then becoming the property of the DOE. We also had the added challenge of winter weather, so we installed air dryers and used air line antifreeze to keep the system from freezing up. The UHP lines were kept running, but as the temperatures dropped, we blew them out with air.”

After the concrete plug was lifted from the tank, it was immediately wrapped in a plastic sleeve to prevent spread of contamination and then was placed in an isolated area where it is being staged for disposal at the Hanford Site. A large riser was placed in the hole to support the robotic retrieval system. According to the DOE, the riser has a shield plug bolted to its opening and thick gasket material around its outside to seal the hole.  The DOE plans to begin retrieving waste from the tank this summer.  The tank is one of more than 100 similar underground tanks that the DOE is cleaning out as part of its environmental cleanup effort at the Hanford Site, which was once home to nine nuclear reactors that produced plutonium for the Manahattan Project and the U.S. nuclear arsenal. Hanford is considered the most contaminated nuclear site in the U.S.

This article is from a Success Story written by Jet Edge Waterjet Systems.
AK Services is a licensed distributor of Jet Edge Equipment.