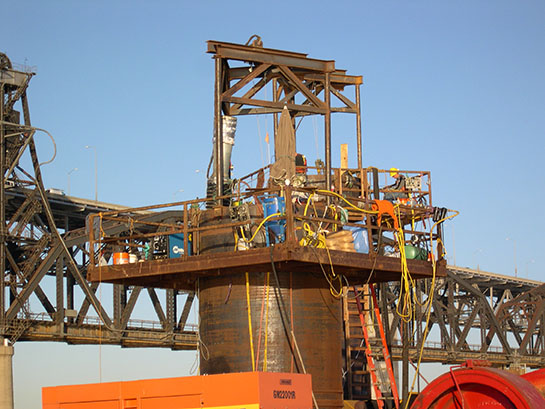 If one word could describe the amazing water jet feats accomplished by water jet contractor AK Services, it would be “MONUMENTAL,” and the all caps are no exaggeration. Known coast-to-coast for its can-do reputation, this Boston-area contractor has completed some of the nation’s toughest and most historically and environmentally significant water jet surface preparation and mobile cutting projects.

AK Services’ other water jetting feats include cutting 3,500 lineal feet of steel during a bridge construction project in California, waterjetting 90 percent of the road surface on Boston’s Central Artery, and removing PCB-contaminated caulk from a pumping station situated directly over the city’s drinking water supply.

AK Services entered the ultra-high pressure water jet industry in 1992, a spinoff of the former Aqua Kleen which specialized in using high-pressure water to clean Navy vessel oil tanks during the Navy’s 70s-era conversion from black oil fuel systems to cleaner distillate fuel systems. AK Services’ first ultra-high pressure project involved blasting away 20,000 square feet of lead paint from a Coast Guard vessel’s engine room and bilge while another crew simultaneously removed the ship’s engines for replacement. The project involved removing every speck of paint from tiny nooks and crannies and working in extremely confined spaces among numerous pipes and other obstacles.

AK Services’ President Patrick Canonica recalled how he immediately ordered his first Cummins diesel- powered Jet Edge ultra-high pressure water jet intensifier pump after winning the Coast Guard bid because water jet was the only way to safely remove the lead paint with the engine crew present. “Had they sandblasted it, they would have had to shut it down and cocoon it and create a hazardous work area,” Canonica said. “With water jet, the big advantage is you don’t have to provide containment because it puts the lead into an aqueous state.”

This article is from a Success Story written by Jet Edge Waterjet Systems.
AK Services is a licensed distributor of Jet Edge Equipment.